Colette Williamson joins Hanover Green as a partner in its lease advisory team. 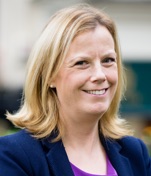 Hanover Green are delighted to announce the arrival of Colette from JLL as a partner working alongside Rob Senior and John Guise, who lead Hanover Green’s landlord and tenant work.

Williamson joined JLL from DTZ in 2012 as a director in its West End lease advisory team.

She started her career with JLL Scotland and was with DTZ for 12 years initially joining the London West End professional advisory team before being promoted to director in 2007.
Hanover Green has been one of the notable success stories among the independent brokerage businesses that launched in the UK following the 2008 economic downturn.
The agent provides advice on office and industrial occupation, investment, development, rent review and lease restructuring work in London and the South East of England.