Hanover Green Retail & Shaftesbury are delighted to announce restaurant brand INKO NITO will open its first UK site in London at 55 Broadwick Street, where Carnaby meets Soho this May 2018.

Designed by Los Angeles-based Studio Mai, the restaurant has been inspired by the buzz and lively atmosphere of dining in a street market filled with casual counter seating to create an engaging social space. Situated in the heart of the restaurant is the open robata grill, offering dishes such as beef cheek with spicy Korean miso or bone marrow with smoked soy, garlic toast and shallot.

Reaffirming London as the restaurant capital of the world, Shaftesbury continues to provide exciting F&B opportunities in their highly popular, sought-after locations.

Creator and co-founder of INKO NITO, Rainer Becker: “INKO NITO” is an evolution of what was the original concept for ROKA. We’ve gone ‘back to basics’ to create a local, accessible destination for London diners. Combining bold and adventurous flavours in a relaxed yet high-energy environment, our ambition is to become a must-visit destination, within Soho’s unprecedented dining scene.”

Hanover Green Retail & Shaftesbury has welcomed seven new eateries to Carnaby and Soho since Autumn 2017, including pasta concept, Pastaio from Stevie Parle on Ganton Street, all-day taqueria and Mezcal and Margarita bar Breddos Tacos, Kingly Street. Whilst Rupert Street, Soho has welcomed ‘Evelyn’s Table’ at The Blue Posts from the team behind The Palomar and The Barbary as well as Aegean bar and restaurant Hovarda, from the group behind the lauded Yosma and Frescobaldi restaurants. 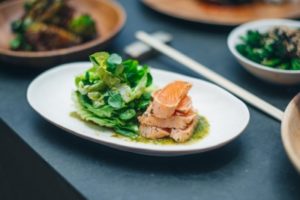