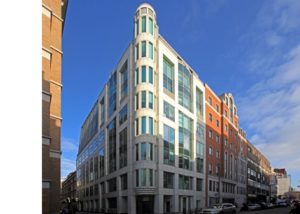 The property is let in its entirety to Sony Interactive Entertainment to September 2018. Its lease expires in September 2018. UKCPT, which was advised by Standard Life Investments, acquired the building in 2006.

“Having been approached by the owner of the adjacent building, we felt that, despite this asset’s good location, now was an appropriate time to crystallise a strong return,” said Will Fulton, fund manager at Standard Life Investments.
“This sale also removes short-term letting risk from the portfolio and the potential for significant capital expenditure.”.

The Freehold of 33 Broadwick Street, W1 was also sold this month to Brockton at just over the asking of £48 million. This was openly marketed and was let off a similar office rent to No 13 and on a similar lease term. This one sold for a NIY of 3.9% and a capital value of £1,150 psf.